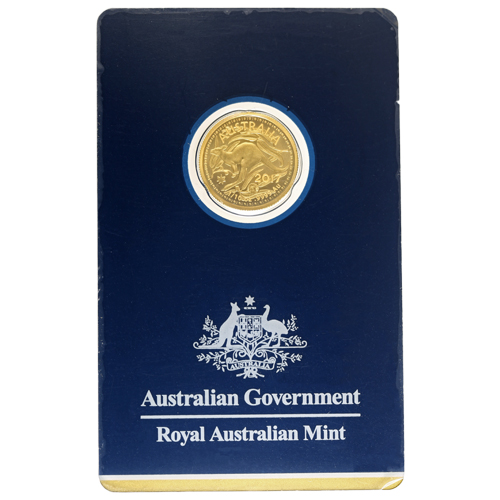 The tamper-evident, sealed assay card packaging your coin comes with makes it easy to tell immediately if your 2017 1/10 oz Gold Royal Australian Mint Kangaroo coin has been tampered with or mishandled in any way.

All Gold Royal Australian Mint Kangaroo Coins in this listing are in BU condition. Coins in this condition exhibit no signs of wear and tear, though you may notice minor flaws ranging from breaks in the luster and spotted surfaces to contact marks from the coining process.

On the obverse of all Royal Australian Mint coins is the image of Queen Elizabeth II. Created in 1998 by Ian Rank-Broadley, this depiction of Her Majesty serves as the fourth-generation image of the Queen on Australian coinage and reflects her age around the year 1998.

The reverse of the 2017 1/10 oz Gold Royal Australian Mint Kangaroo coin features the image of a red kangaroo species hopping across the Outback. This design was originally used in the early 20th century on Australian copper pennies before decimalization of the nation’s currency in 1965. New features include an enhanced Commonwealth Star, with leaves, nuts, and flowers from the Tasmanian Blue Gum.

Located in the federal capital city of Canberra, the Royal Australian Mint is the official sovereign mint of Australia. Operated and controlled by the federal government, it was established following the Currency Act of 1965, and is the only operating mint facility in Australia other than the state-owned Perth Mint of Western Australia.

We encourage all Silver.com shoppers to reach out to us with questions. Our customer service team is available at 888-989-7223, online through our live web chat, and via our email address. To see similar items, check out our full selection of Australian Gold Coins.