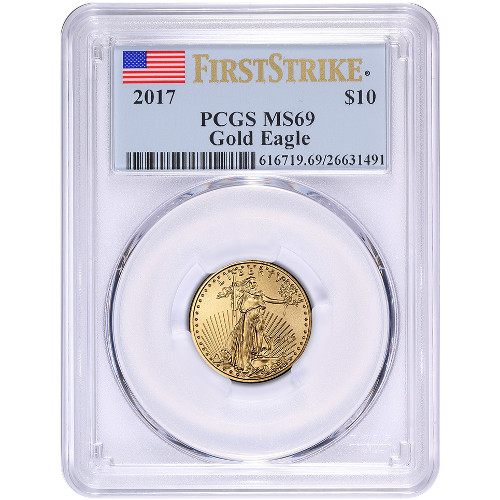 Few American coins are as popular as the Gold American Eagle. The official gold bullion coin of the nation, these popular items were introduced by the US Mint in 1986 with a bullion and proof version available. Over time the program has expanded to include three versions with the four traditional weights available in each. Today, the 2017 ¼ oz Gold American Eagle coin is available with near-perfect certification online at Silver.com.

Congress authorized the production of a gold bullion coin for the federal government with passage of the Gold Bullion Coin Act of 1985. The legislation authorized the United States Mint and Treasury Department to strike a bullion and proof version of the coin in four different weights; 1 oz, ½ oz, ¼ oz, and 1/10 oz.

All 2017 ¼ oz Gold American Eagle Coins available in this product listing are in near-perfect condition according to the Professional Coin Grading Service. Coins with an MS69 grade feature full, original mint luster and a maximum of two minor detracting flaws. These are limited in scope to minuscule contact marks or hairlines, and found only outside of the primary focal areas of the coin.

Coins with a First Strike designation have arrived at the PCGS within a set time-frame. In order to qualify, these 2017 Gold American Eagle coins had to arrive for certification within the first 30 days of the 2017 issue date set by the United States Mint.

On the coin’s obverse field you’ll find the Lady Liberty image from Augustus Saint-Gaudens, which was created in 1907. This design originally appeared on the $20 Gold Double Eagle until 1933, and is considered by many to be the single greatest American coin design ever.

The reverse face of the 2017 ¼ oz Gold American Eagle coin includes the image of a family of nesting bald eagles created by Miley Busiek in 1986. This design is exclusive to the Gold American Eagle series and features a male eagle flying over the nest, where are a group of hatchlings rest under the watchful eye of a female eagle.

First Strike designation gold coins are sought after in anticipation for gold’s continued historic value, which you can monitor minute by minute via our gold price chart.

Please don’t hesitate to reach out to Silver.com with any questions you might have. You can reach our customer service team on the phone at 888-989-7223, connect with us online through our live web chat, or simply send us an email with your inquiries.