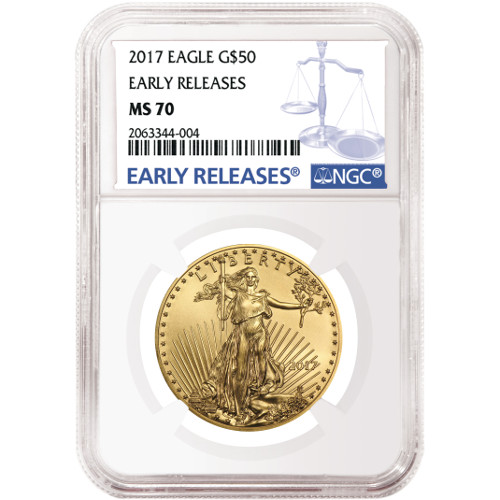 One of the most visible coin programs from the United States Mint is the Gold American Eagle. The nation’s official gold bullion coin, these products are struck on an annual basis in three different versions and four different weights, attracting investors, collectors, and exhibitors alike with its beauty. Today, the 2017 1 oz Gold American Eagle Coin is available online at Silver.com in perfect condition.

Augustus Saint-Gaudens is the nation’s most celebrated coin designer. He was hand-picked by President Theodore Roosevelt to lead an effort aimed at redesigning all of the nation’s official currency starting in 1905. Saint-Gaudens eventually designed an image of Lady Liberty that was distinctly American and modern in comparison to previous designs.

Saint-Gaudens’ depiction featured Liberty in full-length figure as she marched forward from the nation’s capital with her torch held aloft, offering a guiding light to the nation as it sought out a better future. Although Saint-Gaudens’ design featured prominently on the $20 Gold Double Eagle from 1907 to 1933, he never lived to see it on a coin. He died in 1907 just months before the US Mint completed production of the first coins.

The 2017 1 oz Gold American Eagle Coins available to you today are perfect specimens according to the NGC. An MS70 coin has full, original mint luster and lacks any detracting flaws on its surface areas. Early Release designations indicate these coins were received for certification by the NGC within the 30 days following the issue date from the US Mint of 2017 Gold Eagles.

On the obverse of the 2017 1 oz Gold American Eagle Coin is Saint-Gaudens’ Liberty design. It depicts Liberty as she walks forward from the nation’s capital of Washington DC, her robes flowing in the breeze and her torch held aloft as a guiding light.

The reverse of the 2017 1 oz Gold American Eagle coin bears the American bald eagle. In Miley Busiek’s interpretation, a male eagle flies over the family nest, which holds a group of hatchlings under the close watch of a female bald eagle.

Please feel free to reach out to Silver.com’s customer service department. Our team members are available at 888-989-7223, or you can connect with us online through our live web chat and email services.