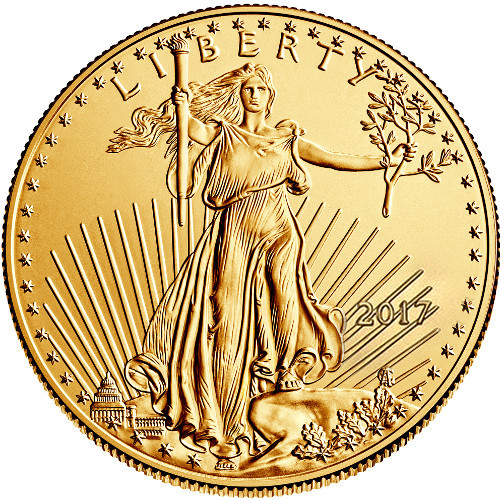 Gold American Eagle coins are released annually by the United States Mint. Struck over more than 32 years now at various mint facilities in the US Mint system, with the modern versions of the coin all struck at West Point Mint facility in New York state. Right now, the 2017 1 oz Gold American Eagle Coin is available to purchase online at Silver.com.

Starting in the early 1830s, the United States moved away from the use of crown gold alloy levels in its circulation gold coinage. Starting in 1837 across all coins in the US Mint production, the United States Mint used .900 gold content in all of its gold coins. This process continued until 1933 when the US was removed from the gold standard by the Roosevelt administration and gold circulation coin striking was ended.

The United States would never strike another gold circulation coin after 1933, and many of those in circulation at the time were removed from circulation and melted down by the Treasury Department to rebuild and supply the nation’s gold bullion depositories in the midst of the Great Depression.

On the obverse of the 2017 1 oz Gold American Eagle coin is Augustus Saint-Gaudens’ original Liberty image. Designed in 1907, it was originally intended to be used on an ultra-high-relief striking, but the US Mint lacked that capability at the time. His creation appeared on the $20 Gold Double Eagle from 1907 to 1933 and was revived and refined for the Gold American Eagle.

Each 2017 1 oz Gold American Eagle coin in this offering is in BU condition. Coins in this condition have no wear and tear, but feature minor flaws including breaks in the luster, spotted surfaces, and contact marks from the production process at the mint.

If you have any questions, please don’t hesitate to reach out to us. Silver.com associates are available on the phone at 888-989-7223, online through our live chat, and via our email address.