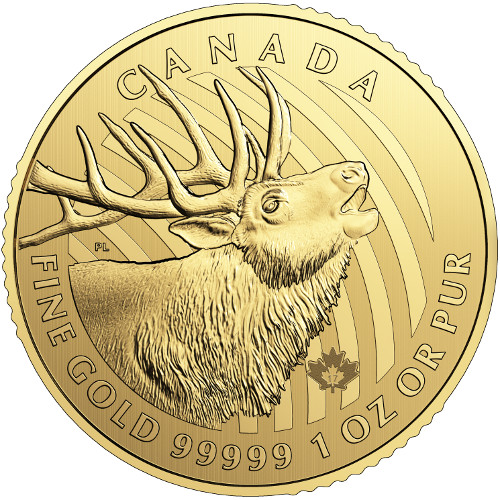 Pierre Leduc has designed all of the gold coin images in the Call of the Wild Series, using natural predators from the Canadian wilderness in a pose that showcases their fearsome and intimidating natural calls. In this particular coin, the massive head and jaws of a grizzly bear are visible as it bellows an ear-shattering roar.

While the Call of the Wild Series features native creatures from the North American continent like so many other Canadian bullion coin series, this one is unique in its use of 99.999% pure gold. This is the purest gold bullion coin in the world today, and its face value of $200 (CAD) is the highest among legal tender bullion coins.

On the reverse of the 2017 1 oz Gold Canadian Call of the Wild Elk Coin you’ll find Leduc’s fourth design in the series. In keeping with the Call of the Wild theme, the large male elk on the reverse has its head raised as it lets out a mating call. Engravings include the designer’s “PL” initials, “Canada,” and the coin’s metal content, purity, and weight, as well as the RCM’s maple leaf security privy mark.

Elk were originally believed to be a subspecies of the European red deer, but in genetic testing conducted in 1998, it was discovered that the two creatures come from distinctly different species. One key physical feature setting the two apart is the wider rump of the elk, as well as a paler hue to its antlers.

The obverse face of the coin bears the familiar right-profile portrait of Queen Elizabeth II. Her Majesty’s effigy was created in 2003 by Susanna Blunt, and is showcased on countless Canadian coins.

The Royal Canadian Mint was founded in 1908 to refine gold and other precious metals discovered in the Yukon Territories at the end of the 19th century. Today it operates modern facilities in Ottawa and Winnipeg.

Please direct any questions you have about these coins to a Silver.com associate at 888-989-7223. You can also chat with us live online, email us, or check the current price of gold on our website.