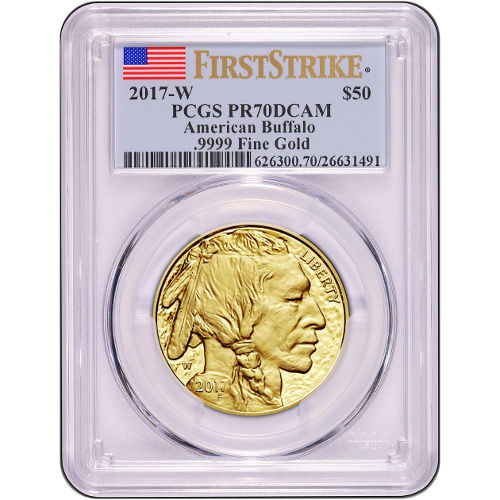 The Proof Gold American Buffalo coin is part of the larger Gold Buffalo series that includes a bullion version of the coin, as well. America’s first-ever 24-karat gold coin, the Gold Buffalo features designs from the iconic Buffalo Nickel which was designed in 1913 by James Earle Fraser and featured on the five-cent piece through 1938. Today, the 2017 1 oz Proof Gold American Buffalo Coin is available to you online at Silver.com in perfect condition.

The designs on the Gold American Buffalo were created in 1913 by James Earle Fraser for the nation’s five-cent piece, which became known as the Buffalo Nickel. Fraser, a native of Winona, Minnesota, grew up in the American Midwest and Plains and used his early childhood experiences as influence for his design of the Buffalo Nickel.

Each 2017 1 oz Proof Gold American Buffalo in this product listing earned a perfect proof grade from the PCGS. Coins with a PR70 grade exhibit full, original mint luster and lack all detracting flaws on the surfaces. As a First Strike coin, the PCGS guarantees each of these coins arrived for certification within the first 30 days of the release date for 2017-issue coins as set by the United States Mint.

On the obverse of the Gold American Buffalo coin is the left-profile portrait of a Native American chieftain. The image does not represent a singular individual, but rather, was designed by James Earle Fraser using a combination of facial features from numerous early 20th century Native Americans.

The reverse of each 2017 1 oz Gold American Buffalo coin includes the depiction of Black Diamond. This bison was a resident of the Central Park Zoo in New York City in the early 20th century, and served as inspiration for Fraser’s design.

Gold American Buffalo Proofs are struck by the United States Mint at its West Point Mint facility. Coins from this location include a “W” mint mark on the reverse, which is noticeable behind the Native American chieftain’s portrait to the lower-left field of the coin.

Please don’t hesitate to contact Silver.com with questions about our gold coins for sale. You can reach us on the phone at 888-989-7223, online using our live chat, and via our email address.