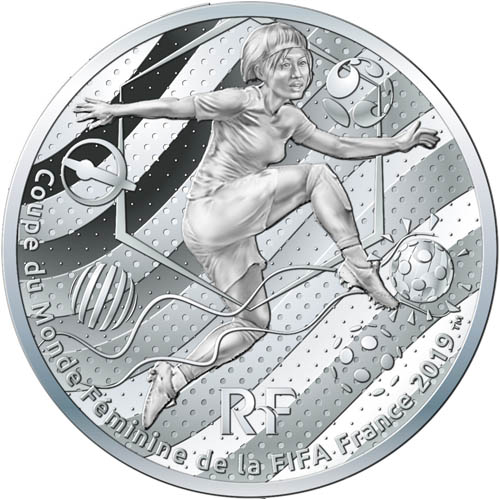 The FIFA Women’s World Cup returns in 2019 with the nation of France set to host the tournament over a one-month period in June and July. France is hosting the tournament for the first time and is the third European nation to do. In honor of its host status, France has issued a range of commemorative silver and gold coins. Today, 2019 10 Euro Silver FIFA Women’s World Cup Volley Proof Coins are available to you online at Silver.com.

The 2019 FIFA Women’s World Cup marks the eighth installment of the tournament, which takes place every four years. Only five nations have hosted the tournament during the previous seven competitions, with the United States and China each having hosted the tournament twice. This is the third time a European nation will play host after Sweden hosted in 1995 and Germany in 2011.

All of these 2019 10 Euro Silver FIFA Women’s World Cup Volley Proof Coins come to you with a protective plastic capsule. For those who want a commemorative presentation option, the Paris Mint does offer World Cup-themed presentation boxes that include an individual option and a four-coin set.

On the reverse side of 2019 Silver FIFA Women’s World Cup Volley Proof Coins is the image of a player volleying the ball. In soccer, it is often referred to as hitting the ball “on the volley,” and requires a player to display hand-eye-coordination and the ability to keep the ball down while striking it out of mid-air.

The obverse face of 2019 10 Euro Silver FIFA Women’s World Cup Volley Coins includes a design of the FIFA Women’s World Cup trophy, along with four national flags. These flags represent the nations that have lifted the trophy at the end of the previous seven tournaments as the winners. The United States is the current champion and leading nation with three all-time championships. Germany has two titles it earned in back-to-back tournaments in 2003 and 2007. Norway won the second-ever Women’s World Cup in 1995 and Japan won the 2011 tournament.

Please don’t hesitate to reach out to Silver.com with your questions. You can call us on the phone at 888-989-7223, chat with us live online, or email us directly.