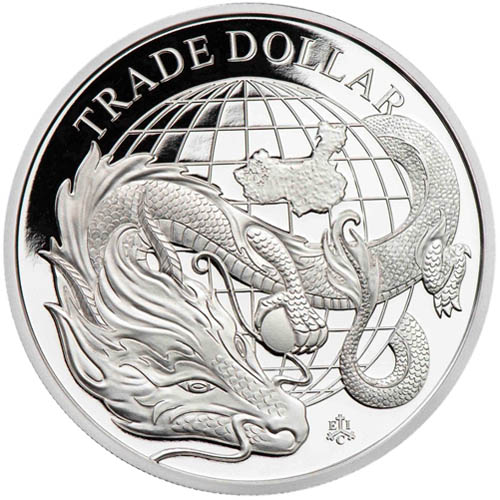 Starting in the 15th century, international trade became a much larger venture among the empires of the world. Emerging global powers like Britain, France, Spain, Portugal, and the Dutch kingdoms all established trade routes to far-flung corners of the world. At that point in time, the Spanish dollar was one of the most widely circulated coins. By the 19th century, other world powers emulated the Spanish silver dollar by issuing silver trade dollars with common purities and weights to better facilitate global commerce between nations. The East India Company has revived these 19th-century designs in a beautiful silver bullion collection. Today, 2021 1 oz Proof Silver Chinese Trade Dollars are available to you online at Silver.com.

The Empire of China was one of the last powers of the Asia-Pacific region to issue a silver trade dollar in the 19th century. While Britain, France, and the United States had issued trade dollars starting in the 1860s and 1870s, it wasn’t until 1889 that China would issue its first silver trade dollar. This was done during the reign of Cixi, the Empress Dowager of China who assumed control of the empire after the death of her husband. She embarked on a massive modernization of the Chinese state, with currency and the economy at the forefront of her efforts. Silver Chinese Trade Dollars were struck from 1889 to 1911.

All of these 2021 1 oz Proof Silver Chinese Trade Dollars are available to you with presentation packaging. Each coin is individually encapsulated and housed within a black presentation box from the East India Company. The coins are proof specimens with frosted designs overlaying mirrored fields.

On the obverse of 2021 Proof Silver Chinese Trade Dollars is an image of Queen Elizabeth II. Designed in 2015 by Jody Clark, this design was first used by the Royal Mint in 2016 and has spread to countless other Commonwealth Nations as the modern portrait of the Queen for currency.

The reverse side of 2021 1 oz Proof Silver Chinese Trade Dollars captures a modern reimaging of the Chinese trade dollar design. The original 1889 design featured a simple strike of the Chinese dragon with the coin’s weight struck in English. In this design, the Chinese dragon encircles the globe with a silhouette of the People’s Republic of China in the background.

Please feel free to contact Silver.com with any questions about silver coins for sale. You can call us at 888-989-7223, chat with us live online, or email us directly.