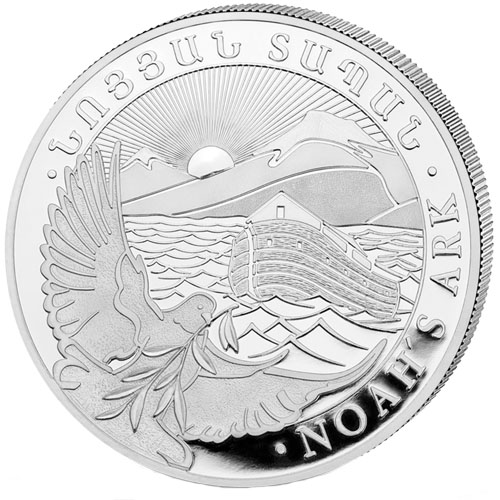 One of the European continent’s newer silver coins for sale is the Silver Noah’s Ark from the Republic of Armenia and Geiger Edelmetalle. The German mint has issued the silver coins in this series annually since 2011 and more recently introduced gold bullion versions of the coin in 2020. Right now, 2022 1 oz Silver Armenian Noah’s Ark Coins are available to purchase online at Silver.com.

Each 2022 1 oz Silver Armenian Noah’s Ark Coin in this product listing comes to you with individual or bulk packaging. Individual coins will ship in protective flips. Multiples are available in plastic tubes of 20 coins or boxes of 500 coins, with the box holding a total of 25 individual tubes. All coins are in Brilliant Uncirculated condition.

On the reverse side of 2022 1 oz Silver Noah’s Ark Coins is a depiction of the famed wooden boat Noah used to save his family and two of every animal in the world. Chosen by God to be spared from his wrath, Noah was tasked with building an ark large enough to house his family and the world’s animals as God punished the Earth with 40 days and 40 nights of epic rains, drowning all who were not aboard the ark.