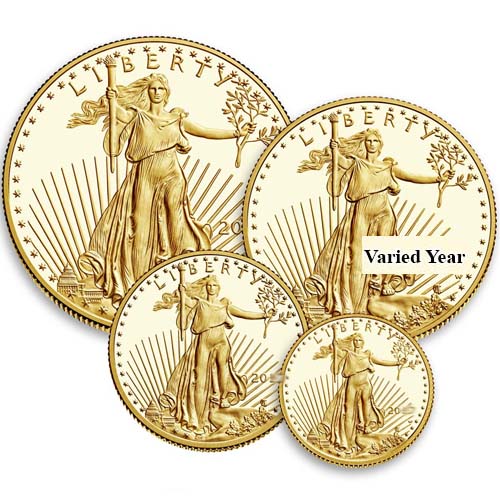 The Proof Gold Eagle is the collector’s version of the nation’s official gold bullion coin series. These coins have been struck every year since their 1986 introduction, with the exception of 2009 when the mint suspended all proof coinage for one year. The 4-Coin Proof Gold American Eagle Coin Set is available to you online today at Silver.com from varied years with original US Mint packaging.

Proof Gold Eagle coins are available annually in four different weights: 1 oz, ½ oz, ¼ oz, and 1/10 oz. While the bullion version of the coin featured all four weights from introduction in 1986, the proof collection was phased in over time. The 1 oz Gold Eagle was available immediately, with the ½ oz introduced one year later in 1987, and the ¼ oz and 1/10 oz coins unveiled in 1988.

The Proof Gold American Eagle Coin has been available to purchase in all four weights since 1988, with the exception of 2009. Amidst the pressure on bullion coinage during the height of the Great Recession, coining of all proof silver and gold coin programs at the US Mint halted.

On the obverse of all Proof American Gold Eagles you’ll find Augustus Saint-Gaudens’ iconic depiction of Liberty. Created in 1907 by Saint-Gaudens, this image originally appeared on the $20 Gold Double Eagle coin from 1907 to 1933 and is widely regarded as the greatest American coin design of all time.

The reverse features a creation from Miley Busiek. An accomplished artist whose works include private pieces and public art displays created for various entities, including federal government organizations, her depiction of the eagle shows a male flying over the nest as a female stands guard over the hatchlings within.

In this product listing, Silver.com offers the annual 4-Coin Proof Gold American Eagle Set from years of issue that range from 1988 to 2008, and 2010 onward. The coins arrive inside the brown satin-lined case the US Mint provided for packaging, as well as a Certificate of Authenticity.

All 4-Coin Proof American Gold Eagle Coin Sets are struck by the United States Mint facility at the West Point Mint. Each coin’s obverse face has a “W” mint mark hiding in the rays of sun emanating from behind Liberty.

Silver.com encourages all customers to contact us at 888-989-7223 with questions. You can also reach out to us online using our live chat and email features.