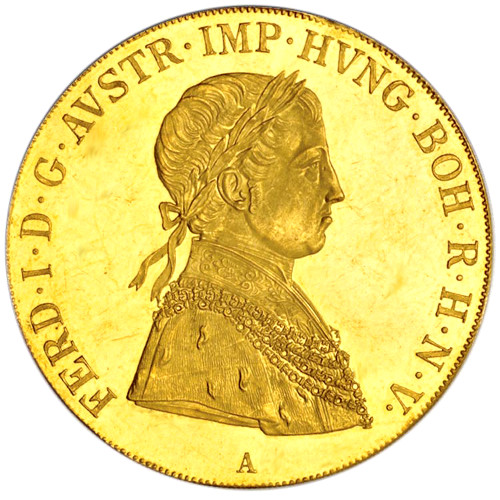 Historic coins often get lost in the shuffle of modern gold bullion products. With the rise of the Krugerrand, Gold Maple Leaf, and Gold American Eagle, among others, historic gold coins from human civilization tend to fly under the radar. Among the more popular gold coins still available to investors today is 4 Ducat Gold Austrian Coins. Today, you can purchase the 4 Ducat Gold Austrian Coin in varied condition from the year of our choice.

The 4 Ducat Gold Austrian Coin takes its name from the Medieval Latin word ducatus, meaning “relating to a duke.” When used in relation to coins such as this one, the meaning was directly interpreted to mean “duke’s coin.” Ducat gold coins were common currency throughout Europe from the Middle Ages until the late 20th century.

Many 4 Ducat Gold Austrian coins still available today have the image of Franz Joseph I on the obverse side. The right-profile image of the emperor of Austria-Hungary is surrounded by a Latin engraving that reads “Franc IOS IDG Avstriae Imperator.” On the reverse side of the coin is the coat of arms of the Austro-Hungarian Empire. The engraving includes a double-headed eagle behind a heraldic shield, with a crown atop the image. Engravings in Latin surround the image, including year of minting and other phrases that vary by year and condition.

Silver.com is determined to ensure all of its customers are happy with their purchase. If you have any questions about your 4 Ducat Gold Austrian Coin or the purchasing process before placing your order, please contact our associates at 888-989-7223. They can also be contacted through our live chat feature.