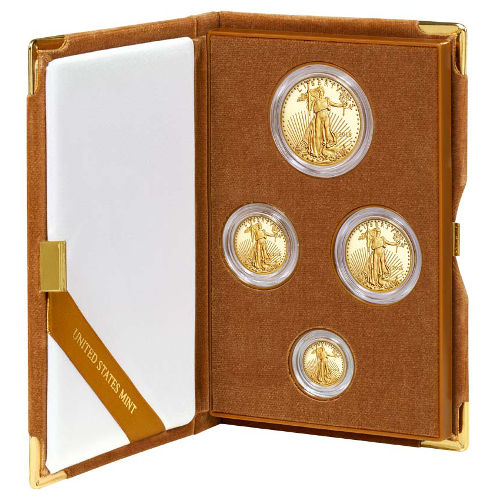 There are few gold coins in the world that are more popular than the Gold American Eagle. Produced annually by the United States Mint, featuring guaranteed weight and purity by the US federal government, these coins are a top choice among investors and collectors alike. Silver.com is proud to offer the 2016-W 4-Coin Proof Gold American Eagle Set, with one of each of the four popular weights in the nation’s official gold coin series.

On the obverse of every Proof Gold American Eagle is Augustus Saint-Gaudens’ 1907 depiction of Liberty. Originally used on the $20 Gold Double Eagle, this design is considered the greatest in American history. In addition to minor refinements for modern production, the only change the US Mint made to Saint-Gaudens’ design was the addition of two more stars to reflect the addition of Hawaii and Alaska to the Union.

The reverse of the coins in the 2016-W 4-Coin Proof Gold American Eagle set bears the image of a family of nesting bald eagles. Created by Miley Busiek, it depicts a male eagle flying over the nest as a female guards a group of hatchlings.

Each of the coin in this set was struck by the West Point Mint facility, which handles the production of all three versions and four weights of the Gold American Eagle series. The mint’s involvement is marked by the “W” mint mark.

Please contact Silver.com at 888-989-7223, chat with us online, or email us with any questions you have about this set.