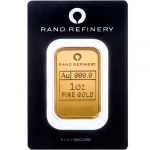 Gold Bullion from the Rand Refinery at Silver.com

On the reverse side of 1 oz Gold Rand Refinery Bars is a depiction of a family herd of African bush elephants. The elephants, the largest land mammals in the world, are featured marching along in a line. The lines of marching elephants alternate with each line from right-to-left marching to left-to-right marching. The family herd includes a matriarch leading the march as a young calf clutches the mother’s tail with its trunk. Another adult elephant follows-up behind the matriarch and calf. A lone inscription on this face reads “Loxodonta,” the species name in Latin for the elephant.

Other Gold Bullion from the Rand Refinery

In addition to its support of the Gold South African Krugerrand Series, the Rand Refinery takes full control of the production of its own branded gold bullion. The 1 oz Gold Rand Refinery Bar is part of a series of gold minted ingots from the refinery. In addition to the 1 ounce gold bar, this series offers 2 Gram, 5 Gram, 10 Gram, and 20 Gram gold bars, as well as 50 Gram and 100 Gram gold bars.

The Rand Refinery also produces cast silver and gold bars for Good Delivery status. These include only a 1000 Troy ounce cast silver bar, along with 100 ounce, 400 ounce, 100 Gram, and 1000 Gram cast gold bars. The Good Delivery silver bar has a minimum fineness of .999 silver. The gold bars vary by weight, with the 100 ounce bar offering a minimum fineness of .995 gold and a serial number only as required, the 400 ounce and 1000 Gram bars featuring .995 or .999 fine gold at a minimum with serial numbers guaranteed, and the 100 Gram bar boasting a minimum of .999 fine gold content with no serial number.

History of the Rand Refinery in South Africa

The Rand Refinery was established to give South Africa domestic control over the refining of gold from its local mines. Prior to 1920, all gold mined from locations in South Africa was transported to the United Kingdom for refining. With the establishment of the Rand Refinery in 1920 by the Chamber of Mines, South Africa took over greater control of its gold supply chain. Today, it is a full-service refinery that produces or supports the production of all of the aforementioned cast bars, minted ingots, and bullion coins, as well as producing its own coin blanks, medallions, and semi-fabricated items for the jewelry industry.

Add Gold to Your Investments with Rand Refinery Gold at Silver.com

Silver.com customer service is available to assist you at 888-989-7223 if you have any questions about the gold for sale from the Rand Refinery. You can also connect with us online through our live chat and email address features.