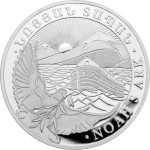 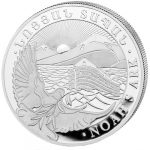 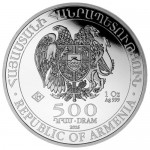 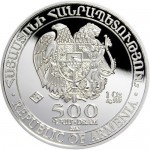 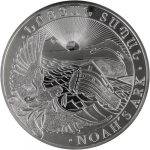 The Noah’s Ark Series is made by the Geiger Edelmetalle Mint on behalf of the Armenian government. This series was initiated in 2011 and includes coins with weights of 1/4 oz to 5 Kilograms. Each coin in the series has the same design and is minted in .999 pure silver.

Armenia is a country that has seen its share of troubles throughout its tumultuous history. Whatever trials and tribulations that the nation and its people have faced, however, they have continued to endure, proudly and defiantly. It is then no surprise that, when looking for inspiration for a national bullion coin, the nation turned to the story of Noah and the Flood. Armenian Noah’s Ark Silver Coins, a series of silver coins made by world-famous minter Geiger Edelmetalle and backed by the full faith and trust of the Armenian government, are a beautiful and timely addition to any precious coin collection.

The Noah’s Ark Silver Coin was designed by the Central Bank of Armenia in 2011, so that the nation could have a bullion coin of its own. When deciding what to use for the design motif, the nation went with the Biblical tale of Noah’s Ark, commemorating Armenia’s historical connection to Mount Ararat, the final resting place of Noah’s vessel. Although the mountain no longer rests within Armenian territory, the design serves as a reminder of Armenia’s heritage and history. Armenia is a deeply Christian nation, and the design emphasizes that piety, as well.

The coin is the product of the Central Bank, but is not minted or distributed by them. The actual creation and dissemination is contracted out to German minter Geiger Edelmetalle, a company with a fine reputation for quality mint work. Geiger, in turn, contracts the actual minting to a private mint in Leipzig, Edelmetallverarbeitungs GmbH. The coins have a 99.9% guaranteed purity and buyers can rest assured that the coins are backed by both the power of the Central Bank and the quality of Geiger.

The coin’s face features the coat of arms of Armenia, a heraldic device made the national symbol in 1992 but featuring Christian iconography that dates back to the pre-Christian history of ancient Armenia. This device itself features an image of Mount Ararat at its center, further emphasizing the connection of the nation to the Flood story. The edge of the face features the words “Republic of Armenia” in both English and Armenian. The obverse also features the value of the coin in the Armenian currency, the Dram, as well as a measure of the coin’s purity, the weight of the coin, and the year of minting.

The reverse image has a great deal of depth, with three layers. The foreground features a dove with an olive branch in its beak, flying at the viewer with wings spread, referencing the discovery of the Ark’s landing place by one of Noah’s birds. The middle ground depicts the Ark itself, cresting a wave proudly. In the background, the sun rises over Mount Ararat, symbolizing the new dawn for the human race represented by Noah’s survival. The edge of the coin has the characters for “Noah’s Ark” in both English and Armenian.

The minting company has plenty of history of its own, dating back to 1720 and the Leipzig and Saxony silver trade. The region’s silver minting began in 1218, as Leipziger merchants sought to turn the products of the Saxony silver mines into legal tender to improve their ability to trade. Geiger began on the outskirts of Leipzig, in Castle Güldengossa, supported by the castle’s lord, a silver magnate and friend of famed composer Johann Sebastian Bach. Today, Geiger makes a variety of products for international distribution beyond the Armenian coins, including secure silver bars with extensive features to verify purity and place of manufacture, as well as themed silver bar products for special occasions.

Armenian Noah’s Ark Silver Coins are competitively priced in comparison to other silver bullion coins like the American Silver Eagles and Canadian Maples. Availability of the coin may vary, as it is a relatively new entrant in the global bullion marketplace, and price is consistent with size.

Buyers on Silver.com can rest assured that their purchases are handled with the utmost of care. Every step of the secure checkout process is designed to safeguard the buyer’s information, making sure your precious information stays protected. All of Silver.com’s packages are insured, to prevent any mishaps in the shipping process and to help get you the precious metal products you desire. Moreover, for orders in amounts higher than $3,000, shipping is free.