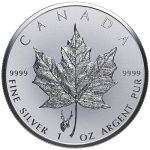 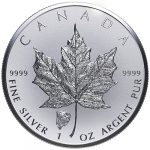 The Wild Canada Coin series coins are struck on Silver Canadian Maple Leaf blanks, with a unique privy mark added to the reverse image. Along with the standard Silver Maple Leaf design, you’ll find a privy mark on the bottom-left of each coin honoring the wolf, grizzly bear, cougar, moose, antelope, and wood bison from the original Canadian Wildlife Series.

Each of these coins will be struck in a brilliant reverse-proof finish. Coins with this type of finish feature a strong, frosted background field and a mirror-like finish on the design set. The finish provides a stark contrast between the two, and is opposite of the average proof version of collectible coins.

The Silver Canadian Wildlife Series of coins from the Royal Canadian Mint was a program that consisted of six coins in total, each with a different design honoring native wildlife species found throughout the forests, mountains, plains, and tundras of Canada. The coins were released on an annual basis from 2011 to 2013, with two new designs introduced each year. The coins each shared commonalities with one another that included:

Two designers were chosen to craft the images used on the reverse face of each of the Silver Canadian Wildlife Series coins. Royal Canadian Mint Assistant Engraver William Woodruff was chosen to create the designs for the 2011 and 2012 coins in the series. A total of four coins bear images created by Woodruff, and he is honored for his contributions with a “WW” inscription on the reverse of each 2011 and 2012 coin alongside his noted designs.

In 2013, the Royal Canadian Mint commissioned famed Canadian artist Emily S. Damstra to create the images used on the final two coins in the series. Damstra was likewise honored for her contributions to the series with an “ED” inscription featured on the reverse side along with her designs.

The first coin released in the Silver Canadian Wildlife Series was the 2011 1 oz Silver Canadian Wolf coin. It featured Woodruff’s design of an oversized wolf on the reverse face. The wolf is one of North America’s most fearsome predators, and on this coin it was featured dominating the design motif. It stands head and shoulders above a snow-covered, wooded forest at its feet as the moon rises just above its head in the background.

On the reverse face of the second coin released this year, the 2011 1 oz Silver Canadian Grizzly coin features the largest land predator in North America. The grizzly bear is feared for its sheer power and size, and is found across the North American continent. Woodruff’s design on this coin includes a grizzly bear at the edge of a frigid body of water, letting a ferocious roar out of its mouth as the rocky outcrop its standing upon gives way to a mountain peak in the distance.

For the fourth design in the series, and second in 2012, Woodruff depicted the quietest killer in the Canadian wilderness: the cougar. The massive cat was depicted with its mouth wide open, growling at its prey as it climbs over a fallen tree branch.

In 2013, Damstra took over the design of Silver Canadian Wildlife Series coins, and offered up the 2013 1 oz Canadian Pronghorn Antelope coin as the first design in the final year of production for the popular series. The antelope is the fastest land mammal found in the Western Hemisphere, and is featured in a slower stage of life on the coin’s reverse as it grazes across the open plains of Canada.

For the sixth and final design in the Silver Canadian Wildlife Series, Damstra and the Royal Canadian Mint introduced the 2013 1 oz Canadian Wood Bison coin. The wood bison is a subspecies of the American Bison. Found on the plains of the United States, the wood bison is found solely amongst the wooded regions and forests of Canada. Where there were once 200,000 of these creatures, today an estimated 10,000 are all that remain. Overhunting in the late 19th century led to a massive population decline that saw the species drop to just few hundred.

On the reverse face is the image of a wood bison as it runs through the cool waters of a river. All of the Silver Canadian Wildlife Series coins shared common engravings on the reverse face. Each one had the word “Canada” along the top, with the purity (.9999) featured on both the right of the design field. The artist’s initials were inscribed to the left, while the words “Fine Silver 1 oz. Argent Pur” feature along the bottom.

The Royal Canadian Mint placed strict mintage limitations on these new Wild Canada Series coins. With just 50,000 available for each design, there’s no time to waste in completing your purchase today on Silver.com. To that end, we happily accept a variety of payment methods for the easy completion of your transaction.

Silver.com accepts Visa and MasterCard credit/debit card purchases, with an average processing time of one business day. Bank wire transfer and PayPal fund transfers often process immediately, releasing your products to our fulfillment center with the quickest turnaround time. Paper checks are also accepted by Silver.com, and offer you the highest purchase amount maximum and a 4% discount on your overall purchase price.

All packages from Silver.com are packaged in discreet boxes to protect the identity of your Wild Canada Series coins during shipping. The United States Postal Service and UPS are our proud shipping partners. Silver.com offers an affordable scale for shipping that determines your price based upon your total purchase price. Any shipments exceeding $3,000 in total are eligible for free standard shipping and insurance.

If your package is lost or stolen during shipping, Silver.com will first work with the carrier to recover your products. If this is not possible, we’ll initiate an insurance claim on your behalf to help you get a full refund of your purchase price.

We encourage Silver.com shoppers to ask questions about this exciting Wild Canada Series of silver coins. You can reach one of our associates on the phone at 888-989-7223, online using our live web chat feature through our website, or by submitting your questions to us via email.