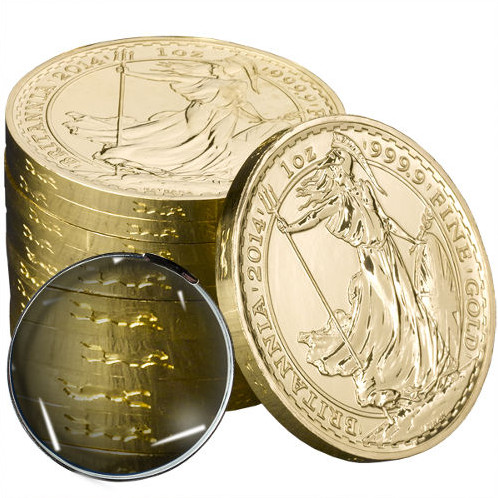 Since their original release in 1987 by the Royal Mint of London, the Gold Britannia Coin Series has been captivating coin enthusiasts in both the UK and across the globe. Now, in celebration of the “Year of the Horse,” the Royal Mint has released an exclusive commemorative coin, the 2014 Horse Privy Britannia. In contrast with other coins that display a privy mark on one of their sides, this coin features a horse-shaped privy mark along its outer edge, making it visible when the coins are stacked.

Every Britannia is struck in 1 troy oz of fine 99.99% pure gold and measures 32.69 mm in diameter. They possess a legal tender face value of 2 pounds sterling each. All Gold Britannia’s ordered from Silver.com are guaranteed to arrive in Brilliant Uncirculated condition, encased in either an individual protective coin flip or their original mint tubes of 10.

The Britannia’s artwork pays tribute to cultural heritage of the UK. Portrayed on the obverse of the coin is Britannia herself, who serves as the female embodiment of the British Empire. Although classically attired in a billowing toga, she has also armed herself with a war helmet and a trident in reference to Great Britain’s naval power. In addition to the armor, she carries an olive branch and a shield bearing the Union Jack pattern to represent the peace that the British navy must protect at all costs. Encircling this poignant image is a border inscribed with the word, “Britannia” and the coin’s mintage year, weight and purity.

Shown on the reverse side is yet another female embodiment of the UK, Elizabeth the II. In this effigy, the benevolent ruler is depicted in profile, wearing her a poised, but reassuring expression on her face. The portrait represents Great Britain’s unwavering devotion to the crown. Further emphasizing this sense of loyalty is the ring of text surrounding the effigy, which includes the ruler’s name and the Latin abbreviation “D G Reg Fid Def” or “Queen by the Grace of God.

The 2014 Horse Privy Britannia Gold Coin not only celebrates the “Year of the Horse,” but also the rich history of Great Britain. So, in order not to miss this exciting opportunity, customers are encouraged to make their purchases while supplies are still available. To learn more about this exclusive coin, please call 888-989-7223 or use the website’s live chat feature. 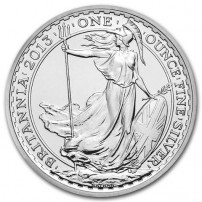