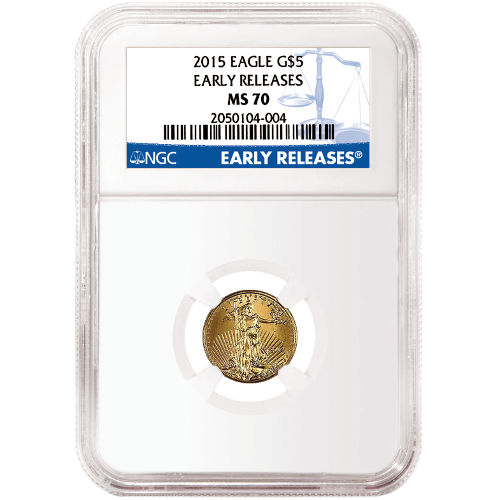 Today, you can own a 2015 1/10 oz Gold American Eagle Coin with a NGC grade of MS70. These coins come from the early release batch, meaning they were received by NGC during the first 30 days of their release in 2015. Each coin has been struck with 1/10 troy ounce of pure gold and has a US legal tender value of $5.00.

When the Founding Fathers selected the bald eagle as a national emblem in 1792, they saw many correlations between the creature and the spirit of the American people. Known for its longevity, majesty, and power, the eagle has served as an official emblem for countless government agencies and consequently appeared on many of the nation’s coin series.

Congress authorized the production of Gold American Eagle coins in 1985 following passage of the Gold Bullion Coin Act. The terms of the act stipulate that all coins must be struck using gold sourced from within the United States. The designers of the imagery on both sides of Gold Eagle are Augustus Saint-Gaudens and sculptor Miley Busiek.

On the obverse side of the 2015 1/10 oz Gold American Eagle is Saint-Gaudens’ image of Lady Liberty. She can be seen walking toward the viewer on the coin, holding a torch in her right hand and an olive branch in her left. Engravings on this side include the word “Liberty,” the year of minting, and stars around the rim representing the US states.

The reverse side of the coin features Busiek’s image of an eagle family. A male eagle returns to the nest as a female eagle stands watch over the family of hatchlings. Engravings on this side include “United States of America,” the weight, purity, and metal content of the coin. The eagle family is flanked by engravings of “E Pluribus Unum” and “In God We Trust.”

The US Mint was founded by Congress in 1792 with passage of the Coinage Act. The facility operates four primary mints across the country that produce commemorative and circulation coins for the government. The NGC’s MS70 grade means these coins have a perfect mint, with no abrasions and a brilliant strike.

Silver.com is dedicated to customer satisfaction. If you have questions about the PCGS MS70 2015 1/10 oz Gold American Eagle, or other products, don’t hesitate to call our associates at 888-989-7223. Our representatives are also available to answer any of your questions through our website’s live chat feature.