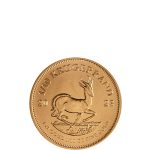 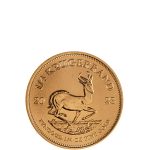 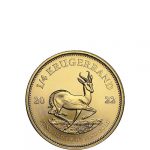 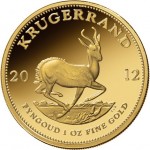 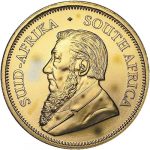 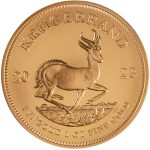 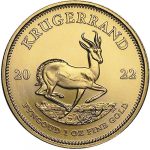 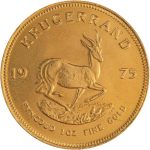 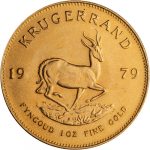 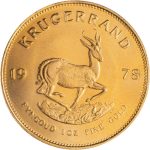 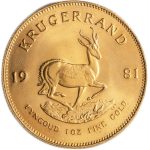 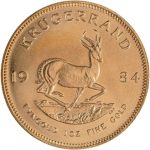 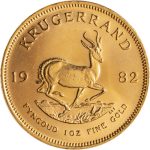 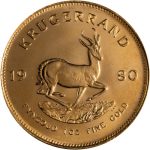 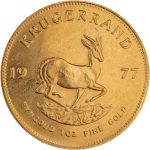 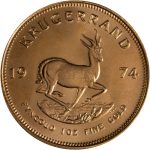 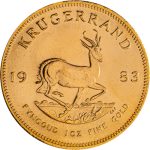 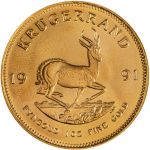 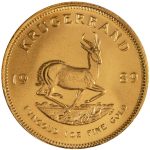 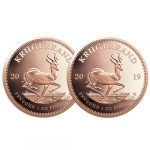 South African Krugerrands are some of the longest continuously circulating gold bullion coins in the world. Because of their high purity and storied history, investors from all over the world clamber to get their hands on this series of coins. As a product of the South African Mint, every Gold Krugerrand is backed by the government of South Africa.

The history of the South African mint dates back to the late 19th century and can be directly attributed to the discovery of large deposits of gold outside of Johannesburg in 1886. The president at the time, Paul Kruger, understood that his country needed coinage of its own and, in 1890, established The National Bank of the ZAR (this was an abbreviated form of the current name of South Africa [Zuid Arfikaansche Republik]). Two years later, the first state mint was constructed in Pretoria. Unfortunately, the British occupation of Pretoria in 1900 put the mint out of operation

At the conclusion of the Anglo-Boer War, as it was later called, the British government decreed that British currency would be the legal tender of the newly formed Union of South Africa.

Roughly twenty years after South Africa’s mint gained its independence from Britain, South Africa as a country also became autonomous. In the following few years, the coinage of South Africa went under a number of noticeable changes, most notable of which is the introduction of an entirely new currency, the Rand. The Rand is still the national currency of South Africa. The name of the Krugerrand gold coin comes from a combination of the last name of the famous president Paul Kruger and the name of the current currency.

The Gold Krugerrand coin was introduced by the South African mint in 1967 as an avenue to private gold ownership for South African citizens. At that point in time, no other national mint was producing gold bullion coins at all comparable to the Krugerrand. Unfortunately for many people, when the coin was first introduced and many years thereafter, the apartheid government of South Africa made it illegal for many countries to import Gold Krugerrands. By 1994, however, apartheid was done away with and Gold Krugerrands were able to be exported more freely. 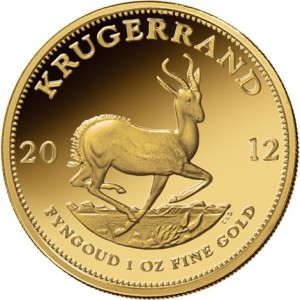 The obverse side of the Gold Krugerrand features the profile image of Paul Kruger as well as an inscription of “South Africa” in English and Afrikaans. The coin’s reverse boasts the image of a springbok antelope, a national symbol of South Africa. Up until 1980, the Gold Krugerrand was only available in the 1 oz weight. In September of the same year, however, ½ oz, ¼ oz, and 1/10 oz Krugerrands were introduced to complement the wildly popular 1 oz version of the coin. The Gold Krugerrand is legal tender in South Africa, but it is unique in that it has no face value. Rather, Krugerrands are unlike most every other gold coin due to the fact that their worth as a coin is equal to its intrinsic gold value.

Throughout its history, varying amounts of the coin have been produced on an annual basis. In the early years (late 1960s), less than 100,000 were produced on an annual basis. After the turn of the 1970s the annual mintages of Krugerrands began to increase rapidly. By the end of the 70s, millions of Krugerrands were produced every year. After apartheid, however, annual productions fell and remained low throughout a large portion of the 1990s. Today, annual mintages of the Krugerrand regularly exceed 200,000 coins.

The Gold Krugerrand is also unlike most other gold coins produced today due to the fact that it is only comprised of 91.67% gold. The other 8.33% of the coin’s makeup is copper added to increase the strength and durability of a coin that is meant to be circulated and used as legal tender in South Africa. Its lower than average purity is made up by the fact that this coin is one of the most historic gold coins still being circulated today. Investors who know the storied history of this coin cannot help but wanting to get their hands on them.

Individual Gold Krugerrand coins will be safely placed in vinyl coin flips as to protect them during the shipping process. Larger order quantities will be packaged in sealed plastic tubes. All orders will be dispatched in discreet packaging and your bullion will be safely secured for shipping.

Because Gold Krugerrands have been minted for so many continuous years, most of which yielded well over 100,000 coins, they are readily available in most every size. The 1 oz Krugerrand is without a doubt the most popular and is available at Silver.com currently as a varied year coin.