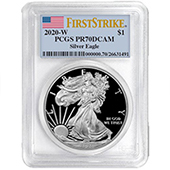 The American Silver Eagle is one of the most widely recognized and respected coins in the world today. Silver Eagles come in various forms. These forms are bullion and proof coins, as well as uncirculated and certified versions. Silver eagles have an interesting and rich history. The coins were originally thought up in order to release a large amount of silver to the public.

Brilliantly Uncirculated (BU) means that the coin has come directly from the mint in sealed packaging and has never been used as currency. Thus, the coin has had little to no contact with human hands. These uncirculated Silver Eagle coins carry a relatively small premium over the spot silver price also adding to their popularity. Silver Eagles can often sell for less than $2.50 over the spot silver price. 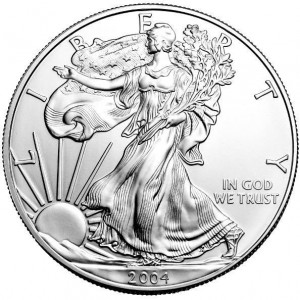 Silver Eagle proofs are a bit different. These proof coins are struck multiple times giving the coin a very shiny luster. Proof coins, because they are considered to be more collectible, carry significantly higher premiums than uncirculated silver eagles. In fact, it is not uncommon for silver eagle proofs to sell for $40 or more over the current spot silver price. 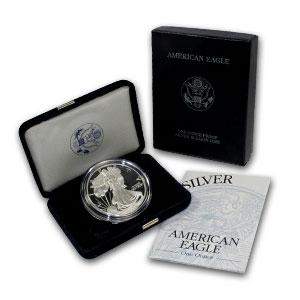 Certified silver eagles are silver eagles that have been handled or circulated but have been sent in to a grading company to be certified. The grading process assigns a grade to the coin based on multiple factors including scarcity, condition and more. The grading company certifies the authenticity and grade of the coin and then sends the coins back out. These certified coins, like proof coins, are considered more collectible and thus carry higher premiums over the spot silver price. 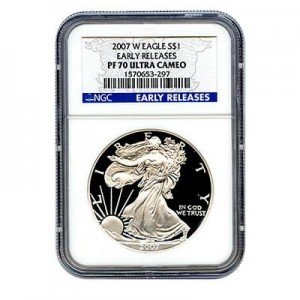 Aside from the fact that it has been physically produced by a reputable source, the US Mint, the coin is also admired because of the care that has gone into creating its design and transferring that onto a fine silver bullion coin. The designs found on both the obverse and reverse of the coin are looked at as symbolic representations of liberty, freedom and patriotism.

The obverse side of the coin features a variation of the Walking Lady Liberty. First created by Adolf A. Weinman for use on the Walking Liberty Half-Dollar, the coin was and has remained to this day, a favorite of the American people. It features Lady Liberty standing aside the ocean with the sun rising beyond. The Lady appears to be embracing the sun with one arm representing the welcoming of a new day. Her gown is made up of stars and stripes which represent the American flag. Her left arm is graciously grasping bundles of oak and laurel. The obverse is also stamped with the year that the coin was minted. Circling above Lady Liberty is the word “LIBERTY” while to her right is the phrase: “In God We Trust.” 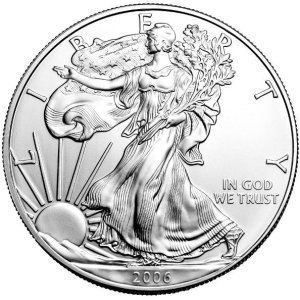 The reverse side of the coin features a rather new design created by US Mint engraver John Marcanti. It depicts a Heraldic eagle which is grasping a bundle of arrows in one talon while the other is holding an olive branch. He calmly sits behind a shield. In his mouth is a ribbon which has the phrase “E. Pluribus Unum” inscribed upon it. Directly above the eagle’s head are 13 stars arranged in an upside-down pyramid pattern. These serve to represent the United States’ beginnings as 13 colonies. Circulating around the edges of the coin are the words “UNITED STATES OF AMERICA” and “1 oz. FINE SILVER  ~ ONE DOLLAR.” 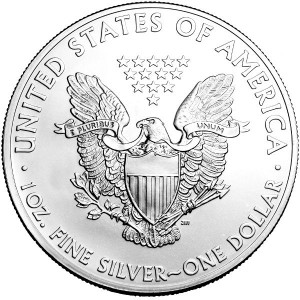 For the 2021 Silver American Eagle with the new reverse design, an image from Emily Damstra comes to the reverse offering a refresh on the American bald eagle visuals in the series. Ms. Damstra’s new design for the reverse seeks to showcase the diligence, care, and protection attributes of the bird with an image that captures the bird in flight. Building one of the largest nests of any aerial predator, the bald eagle in this design swoops down toward an unseen nest with a large branch in its talons. The inscriptions are now arranged around the obverse field with “United States of America” to the upper left and “One Dollar 1 oz. Fine Silver” to the lower right. Within the design rim, behind the bird’s tail feathers, there is another inscription of “E Pluribus Unum.”

Aside from purchasing single coins, there are a few other options available to investors and collectors. After striking these coins at their facility, the US Mint packages them into tubes or rolls of 20 coins. These rolls are then placed into boxes (also known as Monster Boxes) and strapped shut. As to protect the integrity of each coin, when you are ordering quantities of twenty coins, Silver.com will ship them in their original mint-sealed tubes. Quantities of 500 coins will remain in their original mint-strapped Monster Boxes. 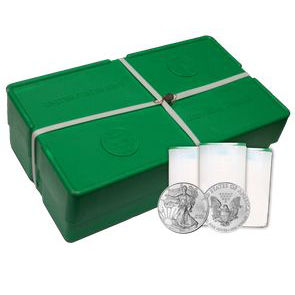 Aside from protecting and maintaining the integrity of each coin, these two options also allow for easier storage. Tubes can simply be placed atop one another in small spaces for storage, while monster boxes can be piled high. All of Silver.com’s American Eagle coins are acquired from certified coin distributors in their original mint packaging so customers can rest assured of each coin’s authenticity. Be sure to browse our wide selection of these coins and add some to your collection, or even start a brand new one! To learn more about our company feel free to call us at 1-888-989-7223 or see what our customers are saying by reading some reviews of buying from Silver.com.