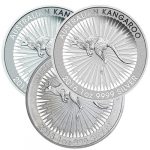 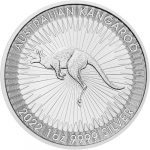 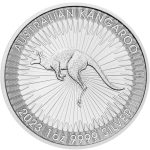 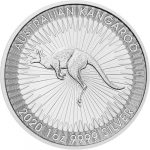 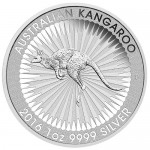 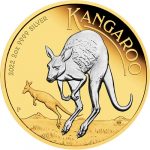 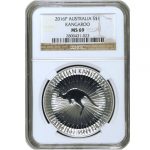 Silver Australian Kangaroo coins are only available in 1 oz weights on a regular basis, although special-edition coins have been produced on occasion by the Perth Mint. The Perth Mint uses a maximum mintage approach for the vast majority of its coins. The Silver Australian Kangaroo has a maximum mintage of 20,000 coins each year, meaning that once that mark has been reached, the mint will not produce anymore coins in that production year.

In certain cases, the number of coins made available for individual purchase was actually 19,000, rather than 20,000. In 2012, the availability of Silver Australian Kangaroo High-Relief Proofs was only 19,000 because 1,000 coins were diverted for inclusion in a four-coin collection of silver high-relief proof coins that also included an Australian Kookaburra, Australian Koala, and Lunar Calendar Year of the Dragon coin.

This occurred again in 2014 when the Perth Mint released a three-coin collection set of silver high-relief proofs. This set again included the Australian Kangaroo, Australian Kookaburra, and Australian Koala coins, but did not feature a Lunar Series II coin.

The Perth Mint’s Silver Kangaroo coin lineup started with a singular proof coin. These coins originated in 2010 as a high-relief proof, and in 2016 increased to include an all-new bullion coin program that follows in the footsteps of the popular Silver Australian Kookaburra and Silver Australian Koala coins.

The availability of these coins is different from the Proof Silver Australian Kangaroo series, mirroring that of the Perth Mint’s other bullion coin programs. The Silver Australian Kangaroo bullion coin will be minted each year in unlimited mintages for the 1 oz weight, which is the only weight available to date in that program. At the Perth Mint, unlimited mintage means that the refinery will strike the coins to meet the demand of investors throughout a production year, and cease production once that time period ends.

Presentation and packaging of the Silver Australian Kangaroo bullion coin differs from the proof version as well. While the coins are primarily offered for individual purchase, it is also possible to purchase these all-new coins from the Perth Mint in different bulk offerings. The first of these is the mint tube, a protective acrylic tube that contains 25 individual 1 oz coins. You can also obtain the new coin in Monster Boxes, which contain 10 mint tubes of 25 coins, for a grand total of 250 1 oz coins.

Like many of the other coin programs offered from the Perth Mint, the Silver Australian Kangaroo features a brand-new design set on the reverse side of the coin each year. The motif always focuses on the kangaroo, but the specific background images and design of the creature itself changes on an annual basis. This adds value to the coin in the eyes of collectors, many of whom invest in the coins each year to ensure these beautiful designs are all represented in their collection.

As an example of the vast differences, the 2010 coin featured a pair of adult kangaroos boxing one another. The scenery behind them included a sparse outcrop of the Outback, with just a few trees visible. The 2015 Silver Australian Kangaroo High-Relief Proof coin features a single adult as it hops in full stride across the Outback. The background is highly detailed, with a winding river, marshlands, and trees all visible behind, with an oversized, intricately designed moon in the sky above.

All coins in the series feature commonalities with each other, as well. Above the design set you’ll always find the words “Australian Kangaroo” engraved, while the year of minting, weight, purity, and metal content are always engraved below.

Each of the Perth Mint Silver Australian Kangaroo coins features the same obverse image, regardless of the year of minting. Ian Rank-Broadley’s right-profile portrait of England’s Queen Elizabeth II is featured in the center of the design, with her name “Elizabeth II,” “Australia,” and the face value of the coin engraved around the image.

The all-new bullion coin also features a new authentication feature. Inside of the first “A” in the word “Australian,” you’ll find a micro-laser engraved “A” that is only visible under magnification. This feature is not found currently on other bullion coins from the Perth Mint, and is used to prevent counterfeiting of these new coins.

Proof coins are designed and struck specifically for collectors, but what makes a high-relief proof different? In short, everything. The production process for a high-relief proof coin uses even greater pressure during the striking process, more so than the average proof coin. Specially designed dies are used to ensure that a deep, concave field is created on the surface when the coins are struck.

In some cases, a single strike under extremely high pressure is enough to achieve this deep, concave field, but it is also possible that multiple strikes will be required to attain the desired visual appearance. The concave nature of the background field creates a remarkable contrast between the design set and its background, giving some coin designs the appearance of 3D imagery.

Why Proof Coins Instead of Bullion?

A century ago, proof coins were largely a byproduct of the production of bullion coins for use in circulation. In order to test the die casts and obtain sample coins for use in national archives, mints would strike the first blanks to test centering and pressure of the coining press. These “proofs” of the design and striking eventually became popular among collectors.

Modern proof coins are often struck in greater numbers than their bullion counterparts to satisfy the demand among collectors. A proof coin today has sharper rims, more refined designs, and smoother fields on the blank areas of the coin. Proof coins are now struck with special dies that include polished fields and chemicals. The combination of factors creates coins that have a frosted appearance on the design sets, with deeply-mirrored background fields.

Additionally, proof coins are handled in a different manner to ensure the quality of the finished product. While bullion coins are collected and thrown into bins, proof coins are separated and handled individually to protect the condition of the coin.

While proof coins have their own popularity with collectors, the new bullion coin appeals to both investors and collectors. The new designs featured each year on the reverse add collectability to the program as numismatists hope to add each new design to their collection on an annual basis. The .9999 fine silver used in this production of these new bullion coins, along with the new authentication features, make the Silver Australian Kangaroo bullion coin an attractive option for those investing in silver.

About the Perth Mint

Australia’s Perth Mint is the oldest operating facility in the country. When the British Empire ruled Australia, the Royal Mint in London established a system of mints in the country to refine and process precious metals found in the country’s western regions. The Royal Mint first opened the Sydney Mint, followed by the Melbourne Mint, and finally the Perth Mint in 1899.

Although the Perth Mint was opened just two years before Australia’s formation as a commonwealth of independent states, the Perth Mint remained under British control until 1970. At this point, control of the facility was handed over to the local government in the state of Western Australia.

Today, the Perth Mint is recognized as one of the finest facilities in the world, producing gold products with a minimum fineness of .9999 and silver products with a minimum fineness of .999. Although the Royal Australian Mint handles the production of official currency for the country, the Currency Act of 1965 provides legal-tender status for all Perth Mint coins, as well.

Silver.com proudly accepts a variety of payment methods when processing your purchase of Perth Mint Silver Kangaroo coins. You can pay for your items using a credit/debit card , paper check, bank wire, Bitcoin, or PayPal fund transfer. All of these forms of payment process immediately, with the exception of paper checks, which take four to six business days to process.

Once your payment has been processed, your items will be released to shipping where they are packed into discreet packaging to protect the identity of your products during shipping and delivery. Silver.com offers an affordable, tiered shipping scale for standard shipping rates. Any purchase over $3,000 qualifies for free standard shipping and insurance. Expedited shipping is also available at an extra cost. All packages are shipped and delivered via the US Postal Service or UPS.

If you have any questions about Perth Mint Silver Kangaroos, don’t hesitate to contact us. You can reach a Silver.com associate at 888-989-7223, connect with us online using our live web chat tool, or send us your questions in an email.