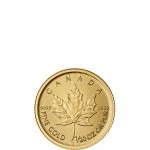 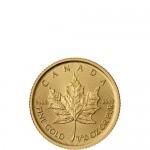 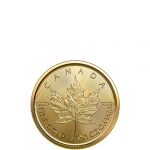 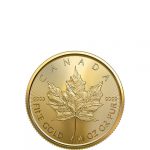 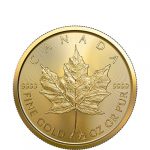 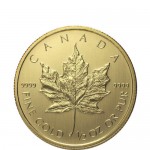 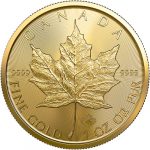 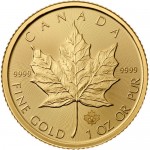 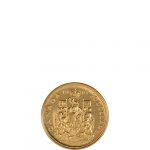 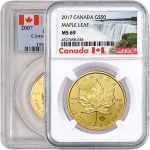 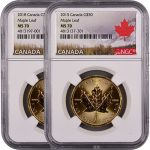 The maple leaf, associated with everything Canadian — from the flag to the hockey team — is a long-standing symbol of national pride. The Gold Maple Leaf Coin continues that trend by featuring a brilliant relief rendering of the famous leaf against a parallel lined background. The coin also has a rich history of design change and historical significance, making it both a smart investment and a great conversation piece.

Introduced to the bullion gold market in 1979, the Gold Maple Leaf Coin is the national bullion of Canada and one of the world’s best-selling pure gold coins. Though made from the highest quality gold, because of the Canadian Currency Act of 1985, all Canadian-minted coins are legal tender for their face value, even though the material used to make coin itself could be worth much more. These coins generally fall into the group of “non-circulating bullion coins,” but legally they are still accepted Canadian tender.

Where Are They Minted?

The Royal Canadian Mint (RCM) exclusively produces the Gold Canadian Maple Leaf Coin. As one of the world’s most respected silver and gold refineries, the RCM prides itself not only in its technical advancement in coin production, but also social responsibility. The RCM founded the Responsible Precious Metals Program and therefore refuses to accept material from recognized conflict areas. The RCM’s streamlined operations and secure vault storage make for smooth, reliable production from raw metal to coin strike, which means high quality and consistent availability of the Gold Maple Leaf design for collectors like you.

Why Was The Coin Produced?

Prior to the Gold Maple Leaf design’s introduction as the first pure gold bullion coin in 1979, the only other bullion coin available was the Krugerrand — a South African gold coin introduced in 1967, accounting for 90% of the global coin market in 1980. However, when the Gold Maple Leaf design began, Krugerrands were largely unavailable due to the economic boycotts associated with South African apartheid, a segregation system run by the National Party from 1948 to 1994. Because of the lack of competition and the purity of the Maple Leaf Coin, the design was a quick success.

Many special releases of the coin are also available, but quite rare. One of the most notable special issues is the Olympic Maple Leaf design, which depicts the emblems of the 2010 Winter Olympic Games.

The Hologram Gold Maple Leaf Set, introduced in 1999, is the first RCM coin to feature a hologram. In 2007, collectors entered their names for the chance to buy one of 500 Gold Maple Leaf Test Bullion Coin with a 99.999 percent purity. And most notably, the One Million Dollar Maple Leaf Coin, with a mintage of just five coins in 2007 and a purity of .99999, has a mass of 100 kilograms, or 3,215 troy ounces.

The RCM packages coins for individual sale, but more commonly gold investors buy the Maple Leaf coin of their preferred size in tubes of ten coins. Avid gold collectors, if authorized, may prefer the Monster Box, which is a bulk order of tubes sealed into a hard, plastic container, often found in denominations of 500 ounces.

The Canadian Gold Maple Leaf Coin is not only a symbol of the rich Canadian history it stems from, but also has an interesting story of its own. This design is perfect for any prospective gold buyer, whether a budding investor, a seasoned collector, or a buyer with Canadian national pride.