Click the button below to view all of our silver bar products, or browse our sub categories by silver bar weight and mint/design below. 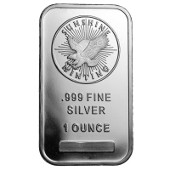 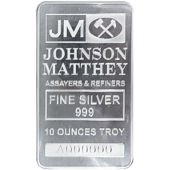 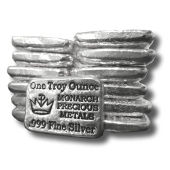 A Short History of Silver Bars

Silver bars are typically 99.9 percent pure silver that has been melted down and minted into bar form in myriad sizes. Silver bullion investors are always purchasing and selling these bars, making them one of the most popular ways to invest in physical silver.

Silver has been a monetary commodity for thousands of years, though the exact starting time period is still in debate among historians. Throughout history, it has been mined, bartered, and traded as currency. In the 20th century, silver stopped being used in legal tender. But silver’s value as a precious metal means its production as bullion continued, with people buying coins and bars for the value of silver itself rather than as currency.

Some people who invest in silver feel that silver bullion bars are a better investment than silver coins, because they cost less to purchase, and they are easy to store given their uniformity. If an investor wants physical wealth, silver bars are a good way to store a large amount in a relatively small space. Investors prefer the security of physically owning assets, because they’re far safer from inflation and market crashes than paper investments are.

Investors in silver also like to collect silver bars, since different mints have different logos, and because certain editions of bars have stopped being produced, making them more valuable than just the current cost of silver.

Silver bars come in probably the widest variety of sizes ranging from 1 gram to 1,000 ounces. With all of these options available, ten ounce bars and kilo bars are popular among investors, though you can also purchase smaller increments like 5 ounces and 1 ounce. One-thousand ounce bars exist, as well, though they’re generally too large for individuals.

First-time investors should be aware that sterling silver is not the purest form of silver. Almost 8 percent of sterling silver is actually copper. Silver bullion purity is denoted as .999 or .9999, meaning 99.9 percent or 99.99 percent pure. Generally, each mint is going to have its own design stamped on the bars. Along with that, the size and the purity will be stamped on the bars, as well.

When buying bars second-hand, be aware of the condition. Scratches or dents make the bar harder to resell, but that doesn’t mean all second-hand bars are in bad condition. However, second-hand bars will run much cheaper because they lack the extra costs associated with newly minted bars.

Where to Get Silver Bars

Silver bars are available from online retailers, such as ourselves, directly from private mints, physical silver and gold shops, auction sites like eBay, and in some countries directly from banks. Bars produced by certain mints are more readily available than others. Silver.com can help an investor find the correct size and mint, as well as offer introductions to previously unconsidered options. Some sizes are far more common than others, making them more readily available to purchase. Ten and 100 ounce sizes are much more common than 25 and 50.