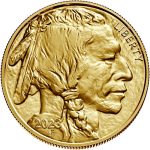 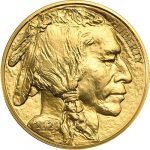 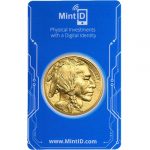 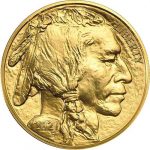 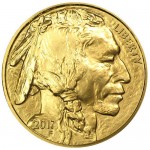 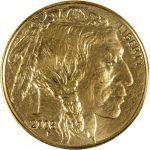 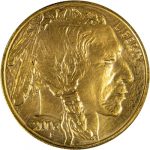 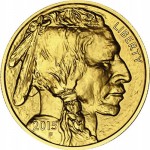 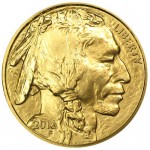 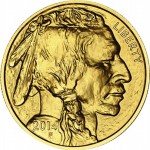 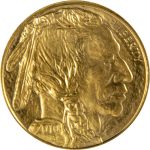 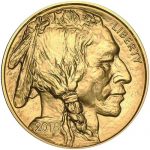 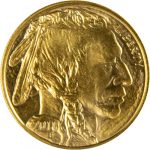 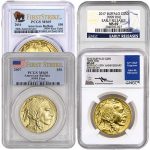 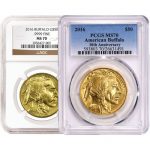 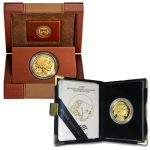 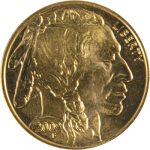 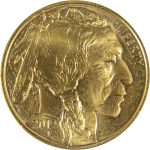 The American Gold Buffalo is a bullion coin produced by the US Mint that has been produced on an annual basis since the summer of 2006. This particular coin derives its design from a gold US coin that was in circulation in the early 1900s. The Buffalo is relatively new to the market but despite its newcomer status it is very popular among both coin collectors and gold investors alike.

One interesting fact which stands out in the mind of investors is that it boasts the highest purity of any U.S. minted gold coin and also has $50 face value assigned to it. The only other gold coin that the U.S. Mint offers on a yearly basis is the American Gold Eagle. The next few sections will do their best to describe and explain every facet of the Gold Buffalo coin including its design, purity, and other important specifications.

The design of the Gold Buffalo is an altered version of James Earle Fraser’s design of the Indian Head Nickel which was first put into production back in 1913. The Indian Head Nickel was minted from 1913 up until 1938. The only years which the Indian Head was not minted was in 1922, 1932, and 1933. This particular design is often heralded as being one of the most attractive designs in the history of American coins. While that particular fact is up for debate, there is no denying that it is a beautifully ornate design.

The obverse side of the coin features the side profile of a Native American. While this Native American looks to be generic in form, Fraser claimed that his design was derived from a mixture of three different native American tribal chiefs; Big Tree, Iron Tail, and Two Moons. All three of these chiefs reportedly posed in order for Fraser to make a sketch of their profiles’. 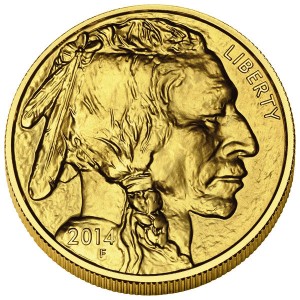 The Reverse side of the coin depicts an American Buffalo, officially referred to as a bison, standing on top of a mound of dirt. Just like the Native American depicted on the obverse side of the coin, this buffalo is not fictional or generic. In fact, the buffalo on the reverse side of the Gold Buffalo coin derives its design from Black Diamond, who lived in the New York City Central Park Zoo in the early 1900s. 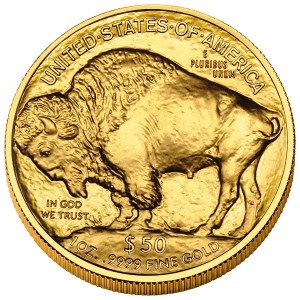 Unlike many other pure gold coins from around the world, the Gold Buffalo is only available in one size; 1 troy ounce. This particular coin has a face value of $50, though its inherent metal value is much more than that based on the current spot price of gold. The diameter of the Gold Buffalo coin is 32.7mm while its thickness is 2.95mm.

Any gold or silver investor will tell you that the design and size of the coin are all fine and good, but the value of the coin can be directly found in its gold content and purity. The more pure a coin is, the more valuable it is going to be.

The Gold Buffalo has a particularly high purity level in that it is made of 99.99% or 24k gold. Many other coins have purities in the 90th percentile, though many of them contain filler metals that are there in order to add strength and durability to the coin because gold is such a soft metal.

The 99.99% gold composition of the Gold Buffalo means that when handling the coin you must be extremely careful to not damage, scratch, or otherwise mark the coin. Keep in mind, while gold content is a huge teller in the value of a coin, so too is the condition which the coin is in.